The EDI was finalized in 2000 in Ontario and has since become a population-level research tool utilized to various degrees in all Canadian provinces and territories.  By the end of 2014, British Columbia, Alberta, Saskatchewan, Manitoba, Ontario, Quebec, Newfoundland and Labrador, Prince Edward Island, New Brunswick, Nova Scotia, Yukon, and Northwest Territories will have collected data at the provincial/territorial-level at least once and Nunavut will have collected data on some of their children.  Most provinces continue to implement the EDI on a regular basis, with many collecting data every other year.  At an international level, many countries have also implemented the EDI.

Current findings from the administration of EDI in Canada show that in most jurisdictions 25% or more of children entering kindergarten are vulnerable in at least one aspect of their development.  Further research linking EDI findings to later educational data demonstrate that, on average, kindergarten vulnerability predicts ongoing vulnerability in the school system.  Numerous studies have shown that early vulnerability predicts much about a person’s lifelong health, learning and behaviour.

The Early Development project focuses on the outcomes for children as a health-relevant, measurable concept that has long-term consequences for individual outcomes and population health.  The data derived from the collection of the EDI facilitate and encourage community, provincial, national and international monitoring of the developmental health of our young learners.

The EDI is designed to be a tool to increase the mobilization of communities and policy makers in order to bring a positive impact on children’s development in their local areas.  Understanding the state of children’s development at the level of the population – that is, for all children – is foundational to mobilizing stakeholders towards change.

For further information on the EDI, please explore the EDI website. 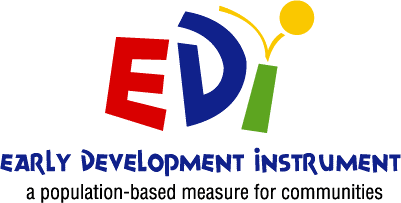